Fashion for the Regency Lady

Gone were the wide skirts, panniers, and elaborate wigs of an earlier generation. The fashionable world now entered the Vertical Epoch, when waistlines of gowns were higher than natural and skirts were long and narrow. White ruled the day, and sheer muslins and gauzes created an ethereal effect. Ornamentation evolved from Greek and Egyptian influence to the Gothic through the Regency, yet styles nonetheless maintained the effect of intended simplicity. 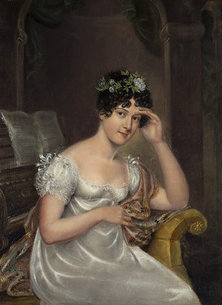 Self-Portrait by Rolinda Sharples, 1814
The wardrobe of a well-to-do Regency lady would have been quite a sight to behold, full of numerous essentials.First things first.

Shift: Worn next to the skin, a shift is something like a sack dress that falls just above the knee. Shifts provide a layer of warmth and keeps gowns a bit cleaner.

Drawers: There’s a bit of controversy as to how popular drawers were. They existed by 1811, when Princess Charlotte was known to have worn them, but others might have considered the garment shocking. Long drawers with feet attached were introduced during the Regency, and by 1817, some fashionable ladies wore pantalettes, a longer, lace-edged variation of drawers that were meant to be seen below the petticoat.

Corset, or stays: The corset supports the bust line and improves one’s posture (it’s difficult to slouch in a corset). Made of jean, a stiff cotton, the corset’s laces tie in the back—too tight, and you can’t breathe properly.

Petticoat: Worn under a gown. Sometimes these served as what we would now call a “slip,” providing an extra layer of warmth or modesty, but other times, they were meant to be seen. Worn under a sheer gown or open-robe style gown, they were quite pretty and were made of muslin, flannel, silk, or cotton.

Stockings: “Everyday” stockings were usually silk or cotton (wool was not as desirable). They could be quite colorful, but during the Regency, they were usually white or pink. Stockings came above the knee and were held in place by ribbons or garters.

Morning Dress: This was what one wore during the day until dinner—not just in the morning. These gowns tended to be high-cut and long-sleeved. Constructed of sprigged or plain muslin, wool, or other fabrics, a morning gown was often a “round gown” (bodice and skirt being one piece).

Walking Dress, Ackermann's, 1819
Walking Dress: This is what a lady would wear out and about. It could be short or long sleeved, depending on the weather, but generally covered the chest. Its hem might be a bit shorter than a morning gown's for ease of walking. In Ackermann’s Repository, walking gowns are often shown with coordinating pelisses or spencers.

In this picture, the lady carries a large muff (see below).

Promenade Dress, Ackermann's, 1814
Promenade Dress: This would have been worn when one was on display--walking through Hyde Park, perhaps, or taking a carriage ride with a gentleman. These gowns were often made of more expensive fabrics than a walking dress. 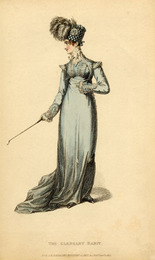 Riding Habit: Constructed of strong fabric like wool, habits resembled long coats, often cut a bit longer on one side to accommodate a side-saddle. A jaunty hat or bonnet with a veil often capped off the ensemble.

Evening Gown:  Often low-cut and extensively trimmed, evening gowns could be constructed of muslin, silk, satin, gauze, crepe, or any number of fabrics. Long- or short-sleeved, they did not have trains after 1812. 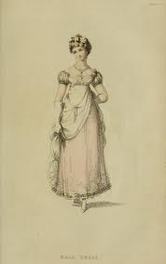 Ball Gown, Ackermann's, 1820
Ball Gown: If we could have our pick of something from a Regency lady’s wardrobe to take home with us, many of us would choose a ball gown, I think. Ball gowns were elegant, exquisitely-trimmed, and constructed of the finest quality fabrics. Often, ball gowns consisted of a slip (probably satin) worn under an over-dress of gauze, sarsnet, or crepe. White was the most popular color for debutantes, but soft colors such as pink or blue were worn, too. Those not coming out might wear cerulean, scarlet, Pomona green, or bright yellow over a white slip. Embroidery, lace, artificial flowers, beads, flounces, and scallops trimmed the gowns, and were coordinated with a headdress. 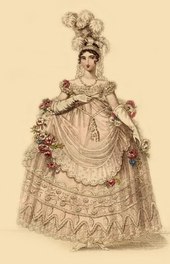 Court Dress, 1817, Ackermann's
Court Dress: While hoops and wide skirts had gone out of fashion decades earlier, the English Court didn’t notice, for they were expected attire for the Regency lady when visiting the Court of St. James’s. Pity the young lady being presented for the first time to the Queen in such an ensemble: a hoop was worn under a petticoat, over which was a skirt of rich satin, lace, or net. Etiquette demanded a debutante wear from three to eight ostrich feathers in her headdress—which was often attached to a tiara.

Wedding Dress: This could be any dress the bride already owned, or a new frock sewn for the occasion. However, wedding gowns were to be worn again, even by wealthy brides. White was often worn because it was a popular color during the Regency, but any color would do.

Pelisse: This is something like a long coat. It can completely cover the gown, or be cut knee-length. They were close-fitting and fastened in the front. Depending on the weather or the occasion, they were sewn from wool, velvet, brocade, or kerseymere.

A warm-hued spencer, 1817, Ackermann's
Spencer: Something like a jacket, this coat covered the sleeves and bodice. Sometimes they were collarless. The spencer is cut quite short to accentuate the era’s high-waist gowns. They could be constructed of wool, silk, satin, or other fabrics, and were sometimes quilted.

Cloak: Depending on fabric and style, these could be worn for dressy occasions or daytime tromps through the woods. Hoods were optional.

Mantle: Similar to a cloak, a mantle could be any length and fastened at the neck. They were made of fur, wool, or velvet. 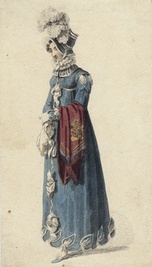 Shawl: A mandatory accessory. Light-weight shawls of muslin or gauze were worn in warmer months or with ballgowns, and heavier shawls of cashmere (goat hair) or fine wool were a necessity in cooler weather. Shawls were often brightly colored and patterned. 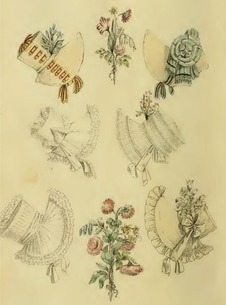 Hats were essential, and came in a plethora of shapes and sizes. Ladies often trimmed their bonnets to match their ensembles.

Bonnets: Bonnets were worn outdoors, and when one paid a short visit or attended church, one did not remove one’s hat or outer garments.  They were made of straw or any number of fabrics, from silk to velvet. Feathers, ribbons, artificial flowers, and other trim were often removed and added, to adapt the bonnet to match new ensembles.

For evening events, however, a headdress, toque, or turban was the standard. These were made of satin or silk and they were embellished with jewels or ostrich feathers. Turbans were popular with older ladies.

Caps: Married women, widows, and females who were “on the shelf” wore caps of lace or muslin indoors. Caps could be simple or downright frilly. 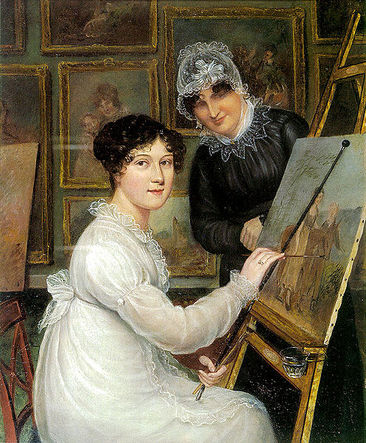 Self-Portrait by Rolinda Sharples, 1820, depicted with her mother. Note Mama's cap, yet unmarried Rolinda isn't wearing one.
Gloves: For formal occasions (including dancing), long, white kid gloves were worn. Short gloves sufficed for daytime, and could be purchased in kid, colored silk, York tan, or wool for cooler months.

Fichu: A triangular piece of netting, lace, or sheer muslin, which is wrapped around the neck and tucked into the bodice of the gown, provides modesty when wearing a low-cut gown.

Muff: PETA would not have approved of the muffs ladies used to keep their hands warm. They were large hollow cylinders made of ermine, sable, swansdown, or sealskin.

Parasol: These shaded a lady’s fair skin from the brutal English sun. The frames were made of bamboo, cane, or telescoping steel, and carried by the handle.

​Fan: By the Regency, a folding fan was less of a flirtation tool and more of an accessory. Often hand-painted, these hung from a lady’s wrist at an evening event. The sticks were made of bone, wood, mother-of-pearl, ivory, or tortoiseshell, and the skin was made of silk, lace, or chicken skin.

Vernis Martin fans were prized: they were varnished by the Martin brothers of France.
Reticule: A lady’s purse, these usually had a drawstring opening and were carried over the forearm (not the shoulder). They were not large, but could fit money, smelling salts, or a handkerchief—helpful, as pockets were not in style. Ladies often beaded or decorated their own reticules, and they appeared in a variety of styles and colors.

Jewels: One wouldn’t wish to be vulgar, but there is no harm in tastefully showing off one’s hereditary pieces at a ball or formal event. Not all at once, of course.

Slippers: Like ballet flats, these were worn at home (made of kid or jean) or with formal wear (made of velvet or silk) and could be embroidered.

Half-Boots: Constructed of kid, jean, or sometimes silk, these were worn for walking or riding. They reached the bottom of the calf and buttoned or laced at the side.

Pattens: To be worn in inclement weather,  pattens are something like overshoes made of wooden slats with metal rings on the bottom. They protected footwear from getting muddy or soggy.
Follow @SusanneDietze