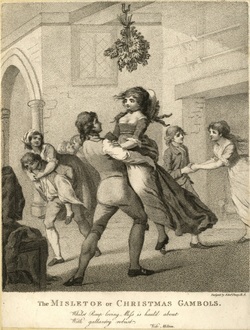 Christmas festivities during the Regency were a bit different from modern-day celebrations, but even then, it was a time for family and friends to gather. With the influence of the Victorians/Germans a few generations yet to come, there were not yet Christmas trees or holiday cards. Decorations were simpler, with greenery gathered a few days before the holiday and fashioned into garland and kissing balls.

Jane Austen's niece, Fanny Austen, wrote a letter on Christmas Day, 1808, describing the previous night's "amusements" of a small ball, a game of Hunt the Slipper, and the singing of carols by the children in residence (the Sussex Carol might well have been one). She doesn't mention church Christmas Day, although services were offered, but instead writes of more singing to the servants and enjoying dinner with the adults.

Gifts were exchanged, but not at the same scale we do today, and many were homemade. Fanny describes receiving gifts and coins, and Emma Austen, another of Jane Austen's nieces, kept a journal of her Christmas presents. Some years she received a total of four, but in 1819 she received several, including a rosebud broach, a leather workbox, a fur tippet, and a peacock feather screen.
​
Up until the Victorian period, the festive and religious celebrations of Christmas lasted twelve days--from Christmas to January 5, Twelfth Night, or the Eve of Epiphany, when the Church remembers the visit of the Magi to Bethlehem. ​
​ 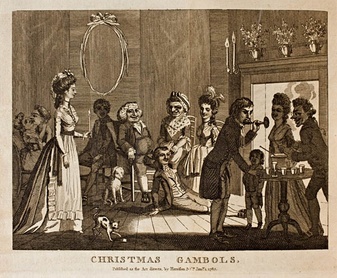 Although the dress indicates this is 18th Century, it's nonetheless interesting to see the "gambols" taking place and the sorts of decorations in the room.
For Regency folk, those twelve days were full of parties and visits and merrymaking. Celebrations were sometimes made a bit more riotous by by the Halloween-like practice of masquerading or reversing roles. In medieval and Tudor England, one lucky person (sometimes by design and sometimes selected by finding a bean baked into his slice of cake) earned the role of Lord of Misrule (or Lord of the Bean, or Bean King) and he was able to preside over the festivities. In Shakespeare's Twelfth Night, Viola dresses as a man and Malvolio, a servant, dreams of being a nobleman.

The idea of the world turning upside down on Twelfth night carried into the Regency. Children were included in balls, masquerades were common, and and role-playing games made for popular entertainment. Sir William Heathcoate attended one such Twelfth Night party with Jane Austen when he was a child, and he later recalled that she'd drawn the identity card for "Mrs. Candour," a role she took to with relish.

More intimate gatherings enjoyed Twelfth Night frivolities, too. Jane Austen's niece, Fanny, wrote a letter of her family's Twelfth Night celebrations in 1806, describing the roles taken by each member of the family (Fanny was the Shepherd Queen). The family made merry in the orange-tree-decorated library, playing games like snapdragon (where children plucked raisins from a flaming bowl of brandy) and bullet pudding, which involves a bowl of mounded flour topped by a bullet. Participants "cut" the flour "cake" with a knife and the person whose slice causes the bullet to fall from the top earns the disgusting-sounding job of retrieving the bullet with his mouth.

Festive foods were consumed through Twelfth Night, including plum cake, warming soups, game, and plum pudding.  (Austen's mother always prepared an extra pudding for guests.) And there was a steady flow of alcohol. Many scholars believe the song "The Twelve Days of Christmas" was not, as some suggest, a coded ditty of Catholic theology, but rather a party game, testing the memory skills of the inebriated. There's no conclusive proof either way, but the song has been around for a few centuries.

By 1870, the practice of Twelfth Night faded and gradually, the festivities of Christmas ended with the evening of December 25. I wouldn't mind celebrating with a little more Regency style!

A terrific source for more information is Jane Austen's Christmas: The Festive Season in Georgian England, compiled by Maria Huebert.
​