Fashion for the Regency Gentleman

The well-dressed Regency gentleman made a dashing picture, although some dandies went a bit overboard, wearing multiple capes over a coat, or preferring shirt points (collars) so high they poked into the wearer's cheeks and prevented him from turning his head. So what exactly did Mr. Darcy wear? 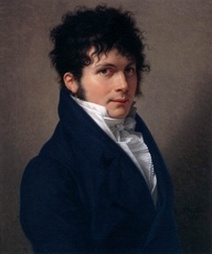 Portrait of a Gentleman, by François-Xavier Fabre, 1809.
Morning Dress

First things first. Undergarments were knee-length drawers of cotton or linen, gathered with a string at the waist, and then buttoned. There was an opening in the front.

Shirt: Fine linen, cotton, or cambric, a gentleman's shirt should be pressed and snowy white. Often made with replaceable cuffs (for the sake of a shirt's longevity), they were pulled over the head and tied or buttoned at the neck. Shirts were plain-fronted for day, and could be frilled for evening wear. I have read conflicting reports as to whether or not collars were attached, but during the Regency, collars were worn standing up with the points touching the cheeks.

We mustn't forget the waistcoat. Essentially what we might refer to as a vest, the waistcoat went over the shirt and could be adjusted in the back with tapes for a more-tailored look.

Waistcoats offered the opportunity to express one's personality, in my opinion. While white and black were the preferred colors for evening wear, during the day, a gentleman's taste or fancy set the guide, so long as the waistcoat wasn't ostentatious. Hues from yellow to lilac to green were worn, and could sometimes represent status, like the blue and yellow striped kerseymere waistcoat worn by members of the Four-Horse Club.

Single- or double-breasted, waistcoats were fashioned of many types of fabric, including silk, kerseymere, satin, or marcella. They could be plain or patterned, embroidered or embellished, with buttons of brass or covered in fabric. The upturned collar ensured that the waistcoat's pattern was visible as it framed the gentleman's shirt collar.

​Coat: Often constructed of kerseymere, merino, or superfine, a gentleman's coat sported tails (cut to the knees before 1816) and a cropped waist. Double-breasted coats were cut shorter in the front than single-breasted coats. Padding was often added to the shoulders, but many gentlemen had their coats tailored to be so tight they needed help to don and remove them.

Breeches: In earlier years, breeches were shorter than they were during the Regency, which now lengthened to the top of the boot. They were tight-fitting and made of leather, nankeen, or wool--or velvet or satin for elegant occasions. They laced or buttoned below the knees, as you can see from the piece at left. During the day, breeches were worn with boots, but for evening wear, they were worn with stockings and shoes.

Buckskins were breeches made of, well, bucks. Male deer. These breeches were a yellowish gray in color and were supposedly very comfortable.

Pantaloons: Also known as "inexpressibles," these were not called pants--ever. They were tight, form-fitting, and a bit like the "stirrup pants" of the 1980s, with a strap under the foot to prevent them from riding up or wrinkling. They were worn with Hessian or half-boots.

Trousers, on the other hand, were cut wide at the ankle and could be worn with shoes, not boots.

Whether a gentleman wore breeches or pantaloons, he favored light colors: fawn, biscuit, buff, or cream.

Hessians were inspired by standard issue footwear worn by military officers. The boots had a low heel, a semi-pointed toe, and were often tasselled, like these in the photo. They were practical for riding and looked fashionable, too. Of course, they'd be polished to a high sheen.

Wellington boots were made popular by the First Duke of Wellington, Arthur Wellesley. He supposedly asked shoemaker Hoby of St. James’ Street, London, for a modification to the Hessian style. The boot that resulted lacked trim, but was of softer leather, lower heeled, and rose to mid-calf. They remained popular for decades.

Top-boots boasted turn-down tops that were a different color than the boot.

Shoes were worn with trousers and breeches. They were low-heeled and tied across the tongue. Shoes worn to Court were called pumps and usually had buckles or ribbon to keep them in place.
​
Neck cloth or cravat: Yards of white linen were used during the Regency, although other colors became fashionable later. Tying a cravat took practice and skill, and the styles were named things like “The Oriental” and “The Mathematical.”

Alas, the time to exhibit one's personality with a vibrant waistcoat must be set aside for evening wear. White waistcoats were worn over crisp linen shirts, and an elegantly tied neck cloth was a must. From there, the gentlemen had a few choices.

Coat: Long-tailed, the coat would probably be made of superfine. Navy blue was the most popular color choice for evening.

Knee Breeches: Worn with white stockings, these could be of pale-colored or black satin. They fell to just below the knee. Pantaloons were not acceptable for evening wear at this time.

Shoes: Dress shoes were black and boasted silver or gold buckles or a ribbon to hold them in place. They had a slight heel.

A coat of embroidered velvet, with knee-breeches to match, would have been worn when at Court. These ensembles were generally a bright color like green, red, blue, or even purple, like the suit at right. Oftentimes, they were embellished with up to six pounds of metallic thread.

White silk stockings and black slippers would be worn. A gentleman would also carry a chapeau-bras and a dress sword.

Great Coat: Made of wool, great coats, top-coats, or overcoats were large and cozy. Usually they were ankle length.

Box- or Driving-coats were ankle-length. During the Regency, capes were worn with them, presumably to keep rain or chill from trickling down one’s neck. However, these became a fashion statement and some tulips wore numerous capes over their shoulders.